This study was carried out to investigate whether repeated controlled ovarian hyperstimulation (COH) affects ovarian reserve. For this reason, we aimed to show possible changes in the expression of PTEN and FOXO3, which are involved in preserving the over-reserve, after applying the COH protocol methods. For this purpose, 18 young Wistar albino female rats (8 weeks old) were randomly assigned as Group-1(control), Group-2 and Group-3 as 6 subjects in each group. Experimental groups were treated with 10 IU/0.1ml PMSG and a COH protocol consisting of 10 IU/0.1ml hCG injection after 48 hours. This procedure was applied 3 and 5 times to Group-2 and Group-3 respectively. For the control groups, the same procedures were performed with 0.1 ml of 0.9% NaCl solution. At the end of the experiment, the ovarium tissues were placed in 10% neutral formaldehyde solution for light microscopic examinations. In histological sections stained with H-E, the number of ovarian follicles was determined using the physical dissector method. However, the expression of PTEN, FOXO3, and LH-R molecules was evaluated by IHC methods. As a result of our study, it was concluded that COH administration reduces the expression levels number of PTEN and FOXO3 proteins and LH-R, which are among the essential components of the PIK3 intracellular signaling pathway and also increased the levels of hormones such as FSH, E2 and LH, which are over-reserve markers, and causes adverse effects on the histological structure, oocyte morphology and number of ovaries.

During fertilization, avian sperm preferentially penetrate the perivitelline membrane that covers the germinal disk region where the female nucleus is present. This phenomenon has been observed not only in domestic birds, but also in wild birds; however, the mechanisms controlling sperm preference are still unclear. In this study, we investigated the possible involvement of annexin family protein in sperm-egg interaction in Japanese quail. Microscopic examination of fertilized eggs indicated that quail sperm penetration only occurred in the germinal disk region, and sperm localized outside the germinal disk were trapped in the perivitelline membrane. Western blot analysis and immunofluorescence microscopy revealed the presence of annexin A1 and A6 in the oocyte membrane, while annexin A6 localized in the perivitelline space of the germinal disk region. Further, our sperm binding assay using recombinant annexin A6 demonstrated that ejaculated sperm specifically bound to annexin A6 expressed in mammalian cell lines. These results suggest that annexin A6, which is expressed on the surface of oocytes may function in sperm-egg interaction in the germinal disk region, and that this binding may ensure sperm retention on the surface of the egg plasma membrane until fertilization takes place in Japanese quail.

The manuscript has been submitted without altering abstract in line with Reproduction's Flexible Submission Process. The abstract is extended and thus does not fit this space.

Chromosomal polymorphisms in assisted reproduction: an analysis of 942 cycles

Infertility affects approximately one in eight couples worldwide. The use of intracytoplasmic sperm injection (ICSI), where the sperm is directly injected into an egg using a micromanipulator outside the body, has become particularly popular in recent years. However, the success rate remains low. In human cells, the genetic material is arranged in structures called chromosomes. Chromosomal polymorphism is a normal variation where the genetic material is arranged differently to the average individual and is more common in infertile couples compared to the general population. We analysed data from 942 ICSI cycles in 697 couples who underwent karyotyping analysis to assess the changes in chromosomes between 2016 and 2018. The pregnancy rate was 31.2%, with 16.0% of participants experiencing a live birth, while 13.8% of pregnancies resulted in a miscarriage and 1.3% were outside the womb cavity (ectopic). The evidence did not identify a clear association between the chromosomal polymorphism and the outcome of treatment.

In vitro culturing of endometrial cells obtained from the uterine mucosa or ectopic sites is used to study molecular and cellular signalling relevant to physiologic and pathologic reproductive conditions. However, the lack of consensus on standard operating procedures (SOPs) for deriving, characterising and maintaining primary cells in two- or three-dimensional cultures from eutopic or ectopic endometrium may be hindering progress in this area of research. Guidance for unbiased in vitro research methodologies in the field of reproductive science remains essential to increase confidence in the reliability of in vitro models. We present herein the protocol for a Delphi process to develop a consensus on in vitro methodologies using endometrial cells (ENDOCELL Project). A steering committee composed of leading scientists will select critical methodologies, topics and items that need to be harmonised and that will be included in a Survey. An enlarged panel of experts (ENDOCELL Working Group) will be invited to patriciate in the Survey and provide their ratings to the items to be harmonised. According to Delphi, an iterative investigation method will be adopted. Recommended measures will be finalised by the steering committee. The study received full ethical approval from the Ethical Committee of the Maastricht University (ref. FHML-REC/2021/103). The study findings will be available in both peer-reviewed articles and will also be disseminated to appropriate audiences at relevant conferences.

The need to develop new treatments to prevent unprompted premature delivery before 37 weeks of pregnancy remains pressing and unmet. Bacteria (Lactobacillus species) that promote vaginal health produce biochemical compounds that prevent the growth of microbes such as Gardnerella vaginalis. Overgrowth of G. vaginalis can cause vaginal infection with smelly discharge and increase a woman’s risk of sexually transmitted infections and premature delivery. In this study, we examined how normal health-promoting (L. crispatus) and potentially harmful (G. vaginalis) vaginal bacteria interact in a laboratory setting. This was in order to observe natural and effective agent(s) from L. crispatus that can hinder the growth of G. vaginalis and accompanying immune response. We observed that L. crispatus clears G. vaginalis by itself and with several biochemical compounds that it produces. Such biochemical compounds can be developed into treatment for vaginal infections and premature delivery due to infection and inappropriate immune response.

Lessons from implementing the Australian National Action Plan for Endometriosis 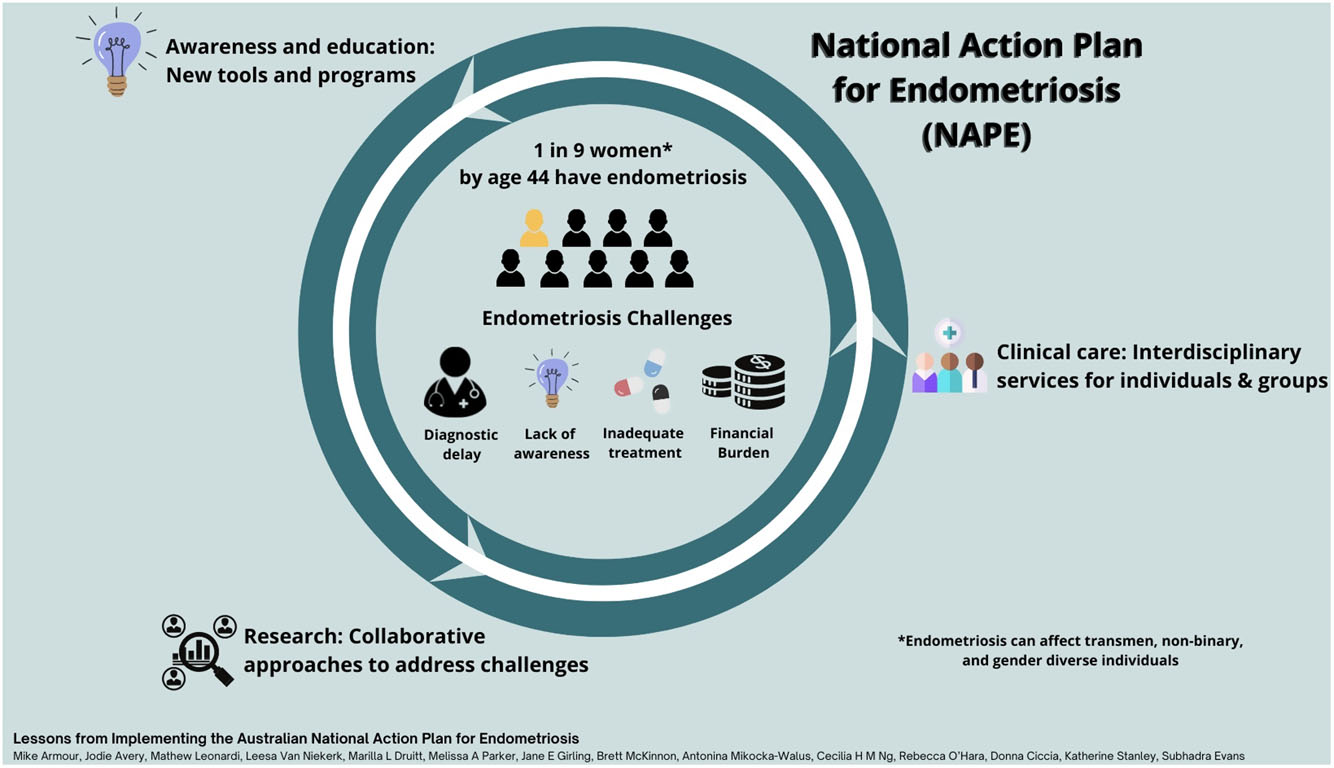 Endometriosis is a common yet under-recognised chronic disease with one in nine (more than 830,000) women and those assigned female at birth diagnosed with endometriosis by the age of 44 years in Australia. In 2018, Australia was the first country to develop a roadmap and blueprint to tackle endometriosis in a nationwide, coordinated manner. This blueprint is outlined in the National Action Plan for Endometriosis (NAPE), created from a partnership between government, endometriosis experts and advocacy groups. The NAPE aims to improve patient outcomes in the areas of awareness and education, clinical management and care and research. As researchers and clinicians are working to improve the lives of those with endometriosis, we discuss our experiences since the launch of the plan to highlight areas of consideration by other countries when developing research priorities and clinical plans. Historically, major barriers for those with endometriosis have been twofold; first, obtaining a diagnosis and secondly, effective symptom management post-diagnosis. In recent years, there have been calls to move away from the historically accepted ‘gold-standard’ surgical diagnosis and single-provider specialist care. As there are currently no reliable biomarkers for endometriosis diagnosis, specialist endometriosis scans and MRI incorporating artificial intelligence offer a novel method of visualisation and promising affordable non-invasive diagnostic tool incorporating well-established technologies. The recognised challenges of ongoing pain and symptom management, a holistic interdisciplinary care approach and access to a chronic disease management plan, could lead to improved patient outcomes while reducing healthcare costs.

Endometriosis is a chronic disease where tissue like the lining of the uterus is found in other locations around the body. For the 830,000 people living with endometriosis in Australia, this often results in an immense burden on all aspects of daily life. In 2018, Australia was the first country to introduce a roadmap and blueprint to tackle endometriosis in a nationwide coordinated manner with the National Action Plan for Endometriosis. This plan was created as a partnership between government, endometriosis experts and advocacy groups. There are several other countries who are now considering similar plans to address the burden of endometriosis. As researchers and clinicians are working to improve the lives of those with endometriosis, we share our experiences and discuss areas that should be considered when developing these national plans, including diagnostic pathways without the need for surgery, and building new centres of expertise in Endometriosis and Pelvic Pain.

Low and high postpubertal ethanol use: damage on adulthood reproduction and offspring

The relationship between adolescent ethanol uses and its impacts throughout life are not conclusive. Thus, we evaluated if the low and high consumption of ethanol at postpuberty interferes with the reproduction, ethanol-naive offspring and if the effects are dose-related. Female and male rats were divided into three groups: low drinker (L), high drinker (H), and control (C). The L and H groups were exposed to ethanol to 10% from 65 to 80 days with withdrawal after this period. The ethanol consumed by low drinkers was 1.41 ± 0.21 g/ kg / day and high drinkers 4.59 ± 0.45 g/ kg / day. The study was conducted in two phases. The 1st phase verified the reproductive capacity in adulthood on generations (litter size and sex ratio). Data were collected over ten years. The 2nd phase analyzed the parent reproductive parameters (body weight, reproductive organ weight, sperm parameters and estrous cycle) and the pup development. We observed a reduced litter size in both drinker groups. Gestational body weight gain and feed consumption were lower in L and H. We observed an alteration in reproductive organs weight in both sexes of H. Females presented a longer estrous cycle duration. Males presented an increase in abnormal sperm, a decrease in sperm count and accelerated transit time. The ethanol-naïve offspring development was also impaired. We conclude that low and high postpubertal alcohol use impairs long-term reproductive parameters, even after alcohol withdrawal. There is also impaired ethanol-naive offspring. Besides, the effects are dose-related. 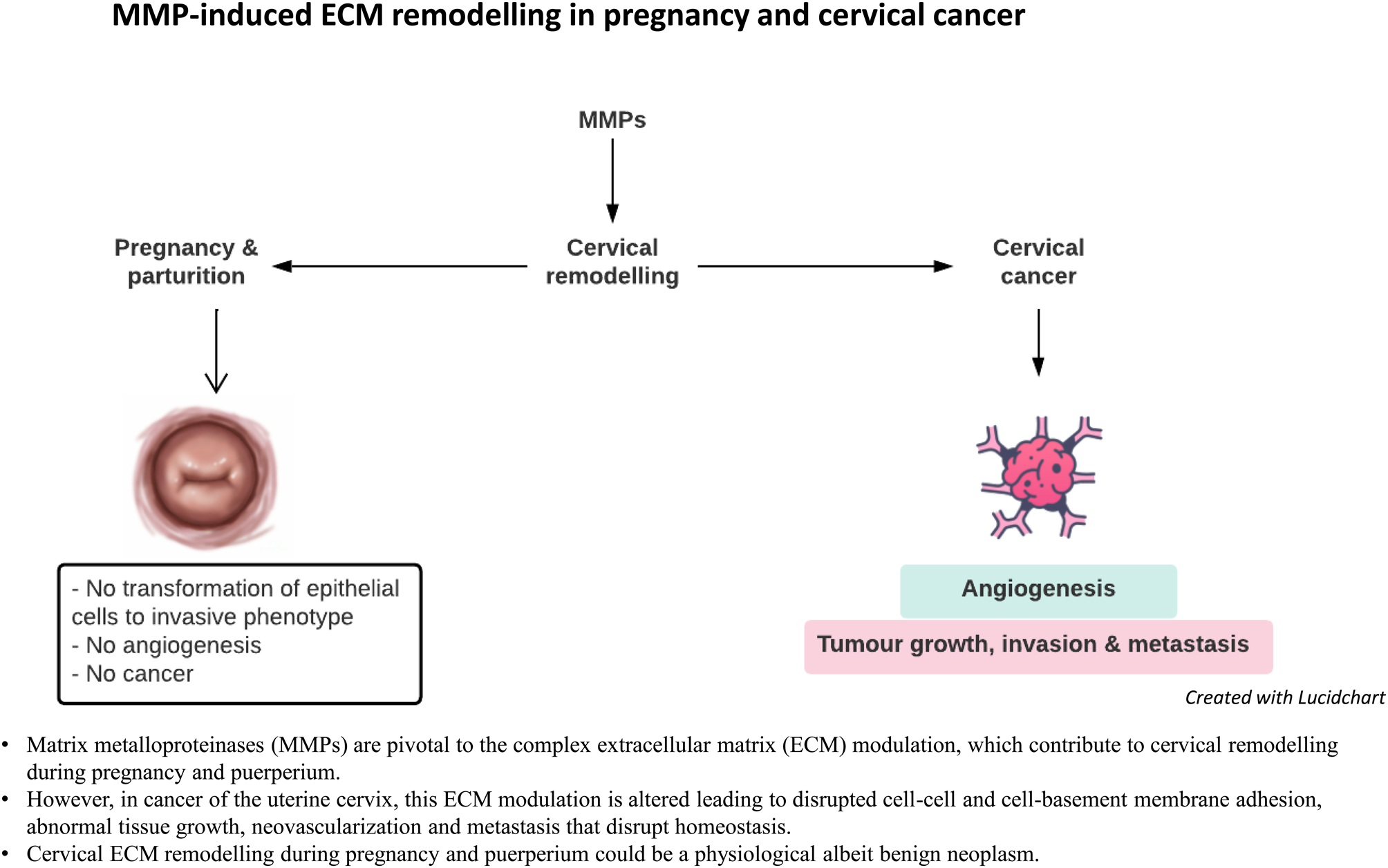 The phenomenal extracellular matrix (ECM) remodelling of the cervix that precedes the myometrial contraction of labour at term or preterm appears to share some common mechanisms with the occurrence, growth, invasion and metastasis of cervical carcinoma. Matrix metalloproteinases (MMPs) are zinc-dependent endopeptidases that are pivotal to the complex extracellular tissue modulation that includes degradation, remodelling and exchange of ECM components, which contribute to homeostasis under normal physiological conditions such as cervical remodelling during pregnancy and puerperium. However, in cancer such as that of the uterine cervix, this extensive network of extracellular tissue modulation is altered leading to disrupted cell–cell and cell–basement membrane adhesion, abnormal tissue growth, neovascularization and metastasis that disrupt homeostasis. Cervical ECM remodelling during pregnancy and puerperium could be a physiological albeit benign neoplasm. In this review, we examined the pathophysiologic differences and similarities in the role of MMPs in cervical remodelling and cervical carcinoma.

During pregnancy and childbirth, the cervix, which is the barrel-shaped lower portion of the womb that connects to the vagina, gradually softens, shortens and opens to allow birth of the baby. This process requires structural and biochemical changes in the cervix that are stimulated by enzymes known as matrix metalloproteinases. Interestingly, these enzymes also affect the structural and biochemical framework of the cervix during cervical cancer, although cervical cancers usually occur after infection by human papillomavirus. This review is intended to identify and explain the similarities and differences between the structural and chemical changes in the cervix during pregnancy and childbirth and the changes seen in cervical cancer.